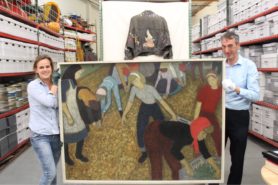 What interested me the most about the internship at the Wende Museum in Los Angeles, was the cultural and the geographic distance. I thought it would bring me another perspective on (cultural) history. On a Dutch University the way they teach you history is often from a Eurocentric point of view, and I also had a Eurocentric view on the world. Also a framed view on the Soviet Union and the cultural artefacts of the Soviet Union member states. The internship at the museum really changed my point of view on historical artefacts and also on (cultural) history in general.

In the museum my main job was being a curatorial intern. I was assisting the chief curator of the museum, Joes Segal, with preparing exhibitions and lectures. For the preparing of an exhibition I had to connect objects to tell a historical story. In this sense my work as a future cultural historian was very practical with selecting and handling historical objects. Not only connecting the historical objects to the theme of the exhibition, but also the stories behind the objects gave me a broader view on the history of the Soviet Union states during the Cold War. In this sense I learned more about the citizens of the Soviet Union, because also everyday objects were available and presented in the archive. This made the past and the people in the past more tangible, because the material was used by the people.

The Soviet Union sometimes has a negative tone among the historical consciousness in the West. Before this internship my point of view was also a little bit prejudiced towards the totalitarian leaders, like Stalin. My point of view changed because the stories behind the tangible objects from the Soviet Union. Especially the collection of home videos of an East-German family left a deep impression on me. For an exhibition about food politics I had to select some parts of the videos were the family was preparing or consuming food and drinks. The home videos gave me a view on the life of an East-European family who were celebrating Christmas or having fun during a board game.  This view on family life in the Soviet Union took my mind off the negative view for a while. Not in a nostalgic way but in a more neutral way to look at the past (if a neutral view on the past exist in the first place).

During my internship I worked four days a week in the museum, so I also had time to experience the city of Los Angeles a little bit more. Except from the nice weather and the beautiful beaches, Los Angeles has a lot of nice other museums to offer. Especially nice modern art museums. It is interesting to see that in the Netherlands, and I think in whole Europe the focus is more on historical museums, but in Los Angeles the focus is more on modern art museums. This says a lot about the cultural differences in the world and gave me an interesting view on the diversity and focus on museums around the world. Besides that are the United States famous for their sport culture, so I joined a social sports league. This was a nice way to start new friendships and to get to know new people in a big city. It was nice to meet people with different cultural backgrounds and this gave me wider view on diversity.

I am really grateful for this experience and it did change my view on history and also on culture in general. The internship really gave me the opportunity to experience some practical skills as a historian, but it also changed my view on history, in a more multi-prospective way.