Posted on 05/01/2017 by gravemaker
in: Categories: News, Nieuws and Thesis. Tags: stotteren, stuttering and thesis.

Thesis: The problem of stuttering. The history of a speech deviation in The Netherlands, 1900-1980 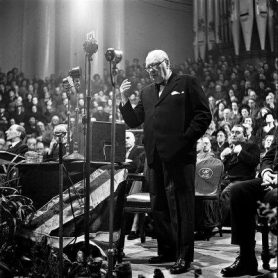 Stuttering has been around for thousands of years. The earliest examples of this speech impediment include Moses and Demosthenes. Many great names followed, like Winston Churchill, who has earned a place in history as a great orator, but whose peculiar use of voice was a direct consequence of his coping with his stutter. In antiquity some famous philosophers developed theories on why people stutter and in the early modern period these ideas were further worked out and methods of cure were developed. During the nineteenth century so called speech therapists (spraakleraren) came into being, first in England, then throughout all of Europe. These first professionals had their own ideas about the causes of and cures for stuttering, but it was not until the late nineteenth and early twentieth century that they started to work together. In the Netherlands the first speech therapists came about in the 10’s and 20’s, but only in the years after World War II they became accepted specialists on stuttering and other speech impediments.

The above is a brief overview of the long history of stuttering. There are many examples of famous stutterers and curious cures. Yet, for all its presence in history, literature and the arts, historical research on the subject has rarely been done. There is some literature to be found, but not very much.

It was in October 2015, when I was a student of the master Cultural History at the University of Utrecht, that I asked my teacher, dr. Willemijn Ruberg, whether it might be an idea to write my masterthesis about stuttering. She was enthusiastic, so I enrolled in her tutorial about the history of the body, and I started to search for literature. I chose to limit myself to the history of stuttering in The Netherlands during the twentieth century and researched the theories that were going around in those days about the causes of stuttering and the way people thought it should be cured. The ‘Tijdschrift voor Logopaedie en Phoniatrie’ (Journal for Speech Therapy and Phoniatrics), published from 1927 till present, was a very useful source. It offered an abundance of articles dealing with theories and cures.

In my thesis I show that during the nineteenth and twentieth century there has been an ongoing about whether stuttering is a physical or a psychological speech disorder. This can be seen in The Netherlands as well as in the rest of Europe and the USA. On more than one occasion I have compared the theories on stuttering with developments in the history of psychiatry, in which the same debate can be seen, albeit some decades earlier. While comparing psychiatry with speech therapy, I came across some literature from the 1970’s that stated that a psychiatric disorder does not exist, but is created by psychiatrists. Could the same be true about stuttering? As historian Benson Bobrick wrote, the history of stuttering is like a ‘quest for a cure’. Still, a definitive cure has not been found and it is doubtful scientists and speech therapists ever will. But is not possible that stuttering does not exist, but is created by speech therapists or perhaps by a society in which ‘normal speech’ is the norm?

It is a thrilling thought that I pose in my thesis, although I could not answer it. People do stutter. I myself stutter. That is a fact we cannot ignore. But in my thesis I do want to make people think about what stuttering means and whether or not it is indeed ‘a problem’.