Posted on 20/12/2016 by gravemaker
in: Categories: News, Nieuws and Thesis. Tags: christmas, delpher and thesis.

Thesis: Sint versus Santa; How the debate about Christmas traditions in the Netherlands between 1960 and 1980 meant more than just criticizing Santa

The process of writing a master’s thesis is a difficult process full of struggles and, of course, tons of research. Some of you might already know that, but for everyone that does not, you better believe it is difficult.

During the master programme Cultural History I did an internship at the Museum Catharijneconvent where I joined a team that explored a new way of representing oral history in a museum and looked for ways to connect these stories to the objects in exhibitions. Our case-study was Christmas traditions and that is how I got the idea to write my thesis about the development of Christmas traditions in the Netherlands.

I joined the thesis tutorial Public Debate with Jochen Hung as my supervisor. This meant that we had to use actual newspaper or magazine articles as primary sources for our thesis. A normal historical analysis of a historical event was thus no longer an option. 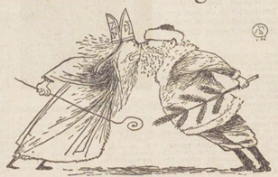 So I focused on the discussion about changing Christmas traditions in the Netherlands during the period from 1960 till 1980. I wrote my thesis proposal with the idea of anti-American sentiments in the Netherlands, but this turned out to be too broad of a research subject. So I rewrote my proposal to a discourse interpretation of the discussion about changing Christmas traditions and tried to interpret this discussion as a way for the Dutch people to discuss the ‘depillarization’, or desegregation, of the Dutch society within these twenty years. Although this was very different from my starting point, I was now able to look into an actual discourse that can tell us something about Dutch society during that period.

To get a good start for my research I needed some good articles of course. Thanks to the Delpher project of the National Library of the Netherlands (Koninklijke Bibliotheek) a huge amount of newspapers and articles are digitized and online available at www.delpher.nl. However, finding the right articles from the right newspapers is not as easy as just googling a decent pasta recipe for dinner tonight. Because not all major Dutch newspapers are digitized or online available, I had to think of another way to find the right newspaper articles in which the changing Christmas traditions were discussed. After some consultation with Jochen Hung I decided to focus on local newspapers. This turned out to be a good decision because in the ‘pillarized’ society of the Netherlands in the early sixties the newspapers were divided on their religious beliefs. Because of that I was able to find articles that represented the different perspectives on the discussion, including some decent opinionated articles.

I ended up with 18 articles that focused on traditions, comparisons with foreign celebrations of Christmas and even the rivalry between the Dutch Sinterklaas and Santa Claus. These discussions gave me the opportunity to analyze the discussion and interpret it as a way to discuss changes within Dutch society itself. In the end I reached the conclusion that some groups in Dutch society were afraid of losing Christian core values of Christmas to the new commercialized traditions which focused on festive dinners and presents instead of the birth of Christ. These were often perceived as American influences, which led to some anti-American sentiment. But during the two decades these traditions became more and more accepted in Dutch society. My conclusion was that the acceptance of commercial Christmas traditions was a long and slow process in which these traditions were made ‘our own’ as long as we found a balance between the materialistic and Christian way of celebrating Christmas.

There were some difficulties with writing my thesis. I had some doubts about the level of representation for the Dutch society as a whole from the articles I used and just doubts about my whole research in total. The feedback sessions with the other students that followed the same tutorial were an immense help, I recommend everyone to discuss your thesis with your fellow students and to ask them for ideas when you’re stuck. That they were experiencing the same problems as I was a great relief.