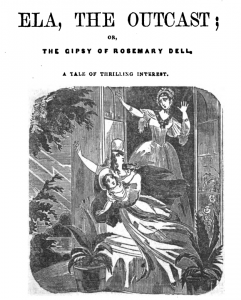 In my experience the hardest part of any substantial writing project is finding a place to start. In the case of the master’s thesis, the first task was finding a suitable subject. My personal interest has always been literature, with a weak spot for stories containing murder, mayhem, and supernatural elements. When browsing through the Wikipedia page of one of my favourite Netflix shows, Penny Dreadful, I came across fascinating source material: penny dreadfuls, cheap sensational stories read by the working class in the nineteenth century.

While they were immensely popular in their time, they have been largely forgotten now. It was this contrast that first caught my eye: why didn’t these stories receive more attention from literary critics and historians? Intrigued by these sources, I ultimately decided to apply a gender analysis to them, because I wondered how two of the most popular penny romances, both featuring female main characters, would fit in the dominant historical framework of separate sphere theory.

The largest challenge when writing my thesis, apart from managing the size of the project, was to balance depth and breadth in the analysis of the two penny romances. Because word count was limited, it was impossible to consider all the information on gender that these two stories present, as, taken together, they cover more than a thousand pages. Trying to discuss all of it would be to the detriment of the depth of the analysis; spending too much time on one passage would risk me losing sight of the whole. Ultimately I chose to focus on three scenes from both stories, representing the three core themes of my thesis: how the man/woman binary was created within the text, how power relationships between genders were constituted, and if and how men and women were identified with separate “spheres”. Limiting myself to these themes and scenes allowed me to think more critically about what the core of my argument would be, and helped me focus on completing the thesis rather than being stuck in an endless cycle of analysis. 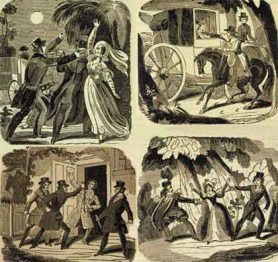 My thesis contributed to the domain of Victorian studies, in particular the relatively recent field that focuses on periodicals. It engages with separate sphere theory – which, though it has been criticized repeatedly, is still surprisingly resilient – and attempts to tease apart the complex ways in which gender intersects with race and class. Maybe equally important, it takes as its starting point literature for the working class, romances to boot, which are generally passed over as being unimportant or too formulaic to engender serious inquiry. I would argue that it is exactly these sources that are necessary to provide a full picture of the (gendered) discourse in the concerning time period. And finally, I personally am quite pleased with having written a thesis on books which feature mistaken identities, secret pacts, sweeping declarations of love, and epic sword fights every other chapter.